iPhone: See Your Envelope Balances As You Fill 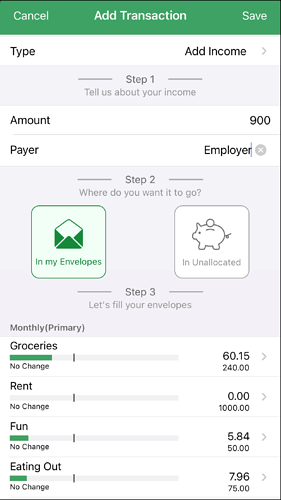 Filling multiple times a month can be a pain

How much do I have left to add to Groceries? Have I already set aside what I need for Rent? These are questions you might ask yourself when it comes time to fill your Envelopes after you get paid.

If you receive multiple paychecks throughout the month, you know it can be hard to know which Envelopes you’ve already filled or how much is left in each. It’s especially hard when those paycheck amounts change, or if they don’t come at the same time each month.

See how full your Envelopes would be if…

Head to the Apple App Store to get the latest version of Goodbudget for iPhone.

This has always been the most frustrating part of Goodbudget for me. Seeing the balance bars might help a bit, but for envelopes that get used frequently, like Groceries or Restaurants or Miscellaneous, the balance is only part of the picture.

If I have budgeted $1000 for the month for Groceries and have added $600 already this month, my next paycheck should allocate $400 - but if I have already spent $400 then the balance will only show $200. I have to also consider what future income I still have to receive for the month, and roughly when I will buy groceries again, etc. It would be better to see the total added to the envelope so far rather than the current balance.

In any case, my solution to this particular problem is to project my income for the budget period. On the first day of that period I add that amount to an account named Projected Income and fill all of my envelopes to the full budgeted amount. Now when I get paid I simply do an account transfer from Projected Income to Checking. I always know how my envelope usage is tracking over the period and I never have to worry about these partial fill issues.

I have to agree that if you’re not filling all your envelopes at once at the beginning of the budget cycle, it’s hard to know how much you should be adding. My “fixed expenses” envelope is ALWAYS behind, because my biggest bill (the mortgage) comes out on the 1st. If I were filling a little at a time, it would be nearly impossible to know how much still needed to go in, because it certainly would be far less than what would take me to the balance bar.
It seems that a more useful tool would be to show how much had already been entered for the month. For example, $500 budget (as already shown), $200 remaining (as already shown) plus “$300 added 6/1/21” or something to show the fills that have already taken place.
That sounds like a big ask and I’m not sure what it would look like–maybe one bar for spending and one bar for filling? But I think for folks working to build up their one month cushion that could be super helpful. I also get that the option to have both weekly and monthly budgets (yay!) can help reduce that problem, so this would be just a slightly different approach.

Thank you both for sharing your feedback! I totally agree that this is only one small piece of the puzzle. There are certainly more things we can do to better support folks who might have multiple or variable incomes throughout the month.

Like you both mentioned, maybe something like a ‘You’ve filled so far’ figure would be helpful so folks not only know where their balances are currently, but also what’s already gone into the Envelope.

For now, I’ve got your feedback on your tracker, and we’ll absolutely keep our ears open, so thanks again for giving us your thoughts!

I’m bumping this topic (tagging @kschedler and @Tiffany) to share a bit about how the issue of “amount filled so far” has been partially addressed with one of our recent Goodbudget Web updates. (I believe Karisa will write more about this update specifically in its own post later, but because we were having this discussion…)

In short, with the new Due Dates update for the Goodbudget Web, there are two new ways that you can see how much Envelopes have been filled in a given period.

First, the gallery card (the details that appear when you click on a specific Envelope) will show how much you’ve filled an Envelope in a given budget period. This is independent of current balance and expenses added – see in the example below how the Envelope has a current balance of 116.00 on a budgeted amount of 100.00, but it only shows “saved 16.00 so far” because only 16.00 has been Filled in this month.

Next, when Filling Envelopes, the suggested Fill amount is adjusted to take into consideration the amount already Filled. Using the same Envelope, given the budgeted amount of 100.00 and the previous Fill of 16.00, the Envelope Fill is telling me that my “Monthly budgeted amount” is only 84.00, because that’s what I’ll need to hit the target in this month.

There are definitely still some limitations here, namely that this system is only active for Due Date-d Envelopes and it’s not truly as obvious as “You’ve filled x so far” on the Fill page, but we hope this update makes this process easier to handle and understand!

I really like this! It looks like a huge help when you’re trying to figure out which budget envelopes have been overspent vs. underfilled.