What are the recommendations for tracking expenses that aren’t regular but that will definitely come up at least a few times per year (and in some cases could be 0 for the year if lucky.)

Specifically, I am thinking of things like medical/dental expenses that would be paid out of pocket - I have been keeping an envelope for this, but most months it’s not being used at all while during others the actual expense could exceed the budgeted amount. I like the idea of keeping it in my budget to create a cushion, but I’m not sure how to get a good view of which categories have a “surplus” that is available to me (i.e. say after going a few months with no expenses in that category)…

Would I transfer the excess to a separate bank account for ad-hoc spending at the end of every month?

For this kind of expense, I use an Annual envelope with a monthly instruction to Add the year-round average at each Fill. I understand that if you’re new to budgeting it may take a while to learn what the average is, but you can continue to adjust as needed.
For example, I have an Annual envelope for auto taxes and registration fees. Our cars aren’t due at the same time, so sometimes the envelope is quite full and at other times it’s nearly empty. That’s ok though, because I figured out how much needed to be there at the highest point, added the difference between that number, the monthly average and the balance today, and now it’s on auto-pilot. That could also work for regular copays for scheduled visits, like the dentist or an annual exam.
For totally unforeseen things like accidents, I rely on my savings account and envelope. I just transfer money from Savings for those bills, since that’s what my Savings is for!
Do try to think of creating an envelope though, instead of an account. Unless you’re not tracking it in Goodbudget at all, it won’t look at that account’s money any differently on the envelope side and you’ll risk overspending.
Hope this helps!

Thanks @Tiffany . I think I understand what you’re explaining but I’m relatively new to GB and still getting my head around all of the concepts and how to use the system to work in a way that makes sense to me. Would you mind providing a more detailed description of the exact setup (accounts and envelopes) and the transactions you would record on a monthly basis to make it work? The auto taxes and registration example would be perfect because I have that as well.

Happy to! And forgive me if I’m TOO detailed, but I don’t want to leave out any steps. (I’m working on the web right now because I think it’s the easiest, but I’m sure this can be done on mobile as well.)
On your Envelopes page, click “Add/Edit” and under More Envelopes, click “Add”, name it “Auto Registration” and make sure the dropdown is Annual. I don’t use Due Dates for mine because they come at different times of the year.
If I were starting right now, I know I’ll have a bill of $670 due in July, $110 in October and $270 in December. That’s $1,050 for the whole year, or $88/month. However, if I just start from $0 today I’ll only have $440 in July ($88x5) and I’ll come up short. To make sure that doesn’t happen, I would add $230 to start today, then schedule a monthly Fill of $88, using the Add instruction. Mar/Apr/May/Jun would go in and I’d have exactly enough by then. Then the $88/mo for Jul/Aug/Sep means I’d have $264 in October to pay that bill, with $154 left over. The Oct/Nov/Dec additions ($264 total) plus the $154 still in there means I have $418 for the December bill, leaving $148 in the account. The next one will be NEXT July, when I’ll have $676 in the account–exactly enough for that bill!
That probably sounds a little confusing but it’s only a challenge the first time, then it runs itself after that.
It’s cheating a bit, but if you are comfortable with spreadsheets you can have it do the math for you and you’ll know exactly how to make it work out. It would look like this: 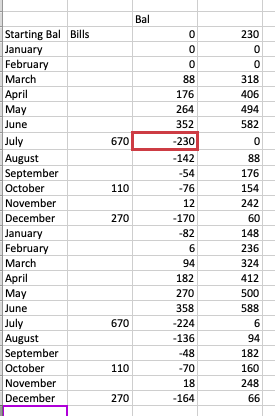 You can see that -230 was the most negative it ever got, so by adding the $230 up front then keeping the monthly addition the same throughout the year I’ll always have enough (sometimes just barely!) to pay the bills in that envelope.
Does that make sense?

Aaaaand, I realized I used both “end of month” and “beginning” of month numbers just to confuse things. Sorry!! Just fixed it…

And also, try not to look at Accounts too much. They’re solely where the money is held, not how it’s spent. Goodbudget sees all the money in all the accounts in aggregate on the Envelopes side, so that’s where 99% of your budgeting takes place. The accounts are only really important during reconciliation.

There’s two different things at play here. Auto registration/taxes are Annual expenses. If you have a car you will definitely be paying these once per year. These I set up as Annual envelopes with appropriate due dates, and every month I add one twelfth of the target amount so by the time renewal month comes around they are full. I have one envelope for each car because the renewal months are different for each and I don’t want to bother trying to figure out what the balance should be “today” so that it works out correctly just in time for each car. I also use Annual envelopes for all magazine subscriptions, Costco membership, certain birthdays, etc.

The other thing is the irregular expenses that you mention such as medical/dental out-of-pockets, veterinary services, car repairs, home repairs, etc. The best way to handle these IMO is to use Goal envelopes. These are similar to “emergency funds” and I generally set the envelope amount to $1000 with no due date. I do not have any automatic fills, but if I did I would exclude these envelopes so they never accrue a “surplus”. I am very intentional about filling these. Whenever I have extra income above the regular monthly expenses, I spread it across these envelopes. Some of them are even well over $1000 in preparation for “wish list” items down the road. Sometimes some other emergency or urgent need takes precedence over the wish list and I will transfer from one Goal envelope to another to cover those needs.

There’s no point to transfer surplus envelope balances to separate bank accounts for ad-hoc spending. That seems like extra paperwork for no benefit. Just make sure your Accounts in GB match your actual accounts at the bank (and PayPal, etc) and if you feel an envelope has too much in it then transfer it to another envelope(s) or back to Unallocated.

Thanks for the excellent responses @Tiffany and @kschedler. This is really helpful. I think it’s starting to click - the envelopes are there to determine how you allocate the funds every month, but the money can be actually be sitting all in one bank account or in multiple. This raises another question: is there a reason to track in GB more than just the accounts where monthly/annual expenses are paid out from? For example, it seems pointless to track a savings account since those funds would never be used to fill envelopes and would just always show as unallocated…?

Also, another thing that is still a little unclear - suppose I have an annual envelope where I am budgeting $120 ($10 per month) but the amount changes every year and usually goes down. So I may end up in a situation where I get to the due date for that bill and I’ve actually “set aside” $120 but the bill is $100. Does that surplus just remain in that envelope when I pay the expense and automatically roll over to the next year’s “accumulation”? Or as @kschedler suggested, this is where I might transfer the excess to another envelope?

I’ll try to pick this apart

You’re correct; the money can be all in one account or in several, and it will show up the same way in envelopes. Your point about savings accounts is well taken, as long as you don’t have goals for some of that money. For example, I have a single savings account in which some money is earmarked for travel, some for renovations, some for emergencies, etc. I have the one account, but the money is allocated into several envelopes that are cumulatively equal to the savings account balance. I track it in Goodbudget both for simplicity and to keep these “buckets” of money separate. (Ally bank started doing this recently too, but since I already had it set up in Goodbudget I decided to continue it.)
Finally, your last assumption is correct; as long as your envelope Fills only Add money (even if they add $0) then the balance will never decrease. If at some point you have a surplus, that’s a good opportunity to move that money to another envelope or even to Unallocated if you wish. You can also change your budget and/or Fill instructions any time, so you could do that as well since the following year is likely to need less money. Those changes are never retroactive, so you wouldn’t negatively affect old transactions.

Great explanation! That pretty much clears it all up. Thanks again!

The registration for my Honda Civic is due in February and decreases every year. Based on what I paid last year I guesstimated this year’s total and set my Annual envelope to $120. Every month I added $10 and the bill turned out to be around $97. So I had $23 left in the envlope, reduced the target to $90, and I am ahead for next year’s target.

About a year ago we knew we’d need to replace one of our iPhones sooner than later, so we created a Goal envelope and planned for the full cost of a new iPhone 12, plus tax, rounding up to nearest $100. By the time the envelope was full, the 13s were out and we just purchased the one we wanted outright instead of financing it. There was an odd amount left behind in that envelope which we just transferred somewhere else and then deleted the envelope.